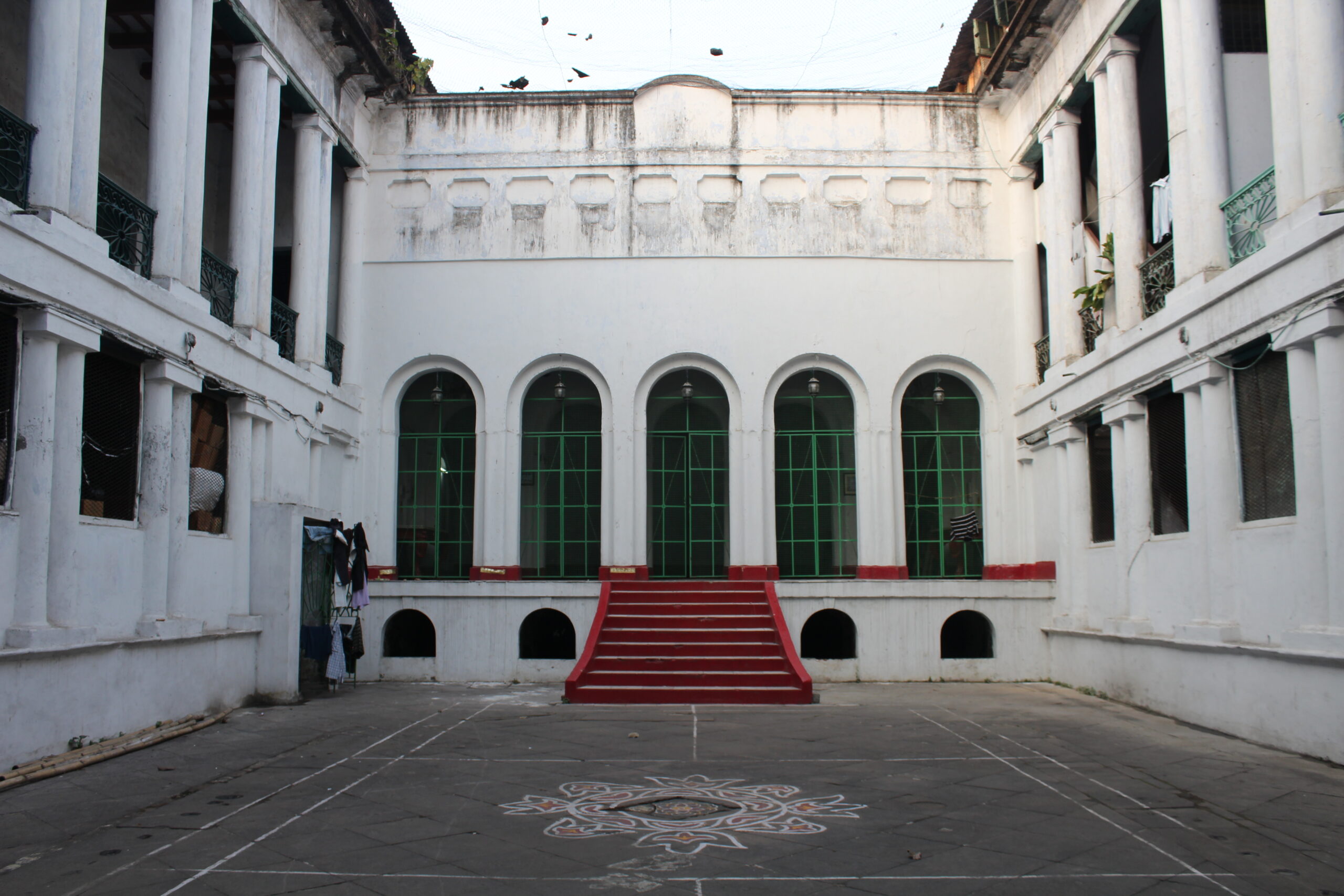 Born in 1792 in Calcutta, Mutty Lal Seal was a philanthropic and a successful businessman, whose contribution towards the society and a deep sense of responsibility towards his countryman is unparalleled. His biographer, Kissory Chand Mitter, had said, “The influence exercised by Mutty Lal Seal, in Calcutta, hundred and twenty years ago, is something which it is now difficult to realise. It was not only the legitimate influence of wealth; It was the influence of a strong will and sturdy intellect operating on a state of society somewhat different from the present”.

Mutty Lal was born in a Subarna Banik family who had settled in Calcutta from Saptagram. His father, Chaitanya Charan Seal owned a textile shop in China Bazar, which closed soon after his death. Mutty Lal was five then. He was educated in Martin Bowl’s English medium school and later did his higher education from Baboo Nityananda Sen High School. He was well versed in poetry and Music.

At the age of seventeen, Mutty Lal was married to Nagari Dashi. He had a daughter, Khetramoni with her. As he did not have any son, his wife pressed him on re-marrying. On her insistence, he married Anandamoi Dashi. From her, he was blessed with 5 sons and 5 daughters.

A Journey form Rags to Riches

During 1809, Mutty Lal was going through a financial crisis. It was being difficult for him to run the household. In 1815 he started working as a clerk in Fort William. Soon he became the godown incharge there. Later he resigned from Fort William and become the customs officer in Bali Khal. Even there he did not continue this work for a very long time. In 1818, with the sudden demise of his Uncle, Gourmohan Seal and his son-in-law, Kamal Lochan Mullick; Mutty Lal was given the responsibility of administering the huge property inherited by Gourmohan’s widowed daughter and her 2 young children. He took a loan from Gourmohan’s daughter to start his own business. He was a far-sighted businessman and could predict the upsurge in demands. His insight helped him earn wealth by investing in the right products at the right time.

In 1819, he bought huge quantities of bottles at a cheap price. After some time when the demand for bottles augmented, he made an enormous profit by selling them at a higher price. A British merchant, Mr Hudson, who was an extensive importer of beer, bought a huge portion of his bottles for packaging the beer which he had imported from England. From this deal, Mutty Lal could pay off his debts and also got enough capital to invest in his new ventures.

Mr. Hudson was a promoter of the first Indigo Mart which was established under the name of M/S Moorey, Hickey and Co. Mutty Lal was one of the early speculators in this market. In 1820, he was appointed as a Baniyaan of Mr. Smithson, a British Officer, who was the owner of Strand Flower Mill. Later, Seal had bought the Mill, after departure of his employer. As a Banyaan, Seal was famed for being able to judge the quality of goods very accurately. From 1820 to 1838 he became the Baniyaan of many other European companies like M/s Litch Kettle Well, Livingstone Cyruses and Co., Mc Leod Fegal and Company, Catman and Co. Tullo and Co. to name a few. He acted as an agent for selling European good and buying Indian goods in return for these companies. He was a very successful agent and earned a lot of wealth through commissions both from Europeans and Indians.

Seal was an intelligent, far-sighted man with a sharp businessman acumen. He had great insight of many Indian products. He started exporting best qualities of Indigo textile, sugar, rice, salt, silk and opium and imported European Textile and Iron products. In 1838 Mutty Lal started international voyages for business. He purchased 13 ships for his business. Mutty Lal used to send these ships for business to China and other European Countries. During that time Dwarkanath Tagore was pioneer in ship building business. His ships used to sail to different countries of the world like America, Europe, China, Japan and other countries. Mutty Lal realized the advantage of using these steamer ships for Internal trade in India. He was the first to manufacture streamer ships for internal trade and named the first ship ‘Baniyaan’.

To safeguard his fortunes against the unpredictability markets, he started investing in real estate. He bought zamindari rights over lands in Mangal Ghat, Bagnan and Mahishdal. He also bought many houses in Calcutta. He purchased the Dharamtalla Bazar from Lord Jakson.

He used to rent these houses and earned considerably from his properties. A News Paper called Sangbad Prabhakar published that Mutty Lal owned a whopping 200 houses in Calcutta itself.

Mutty Lal Seal was one of the founder members of Assam Company Limited which started the Tea Industry in India. He also became one of the directors and promoted the Bengal Tea Association together with Dwarkanath Tagore, Prasanna Kumar Tagore and other businessmen. The Oriental Life Insurance Company used to only insure the lives of Britishers in India. With Mutty Lal’s influence, in 1834 Oriental insurance company started insuring the life of Indians. Henceforth, the company was renamed to New Oriental Insurance company. He was also one of the founder members of Bank of India and was on the Board of the Agricultural and Horticultural society of India.

Mutty Lal Seal’s contribution towards the eradication of social taboos and his protest against immoral customs forced on women bought a revolution in the society.

In the 19th Century the Hindu’s had a lot of orthodox beliefs and Customs. One such custom was Sati which was widely followed not only in Bengal but all over India. This irrational and apathetic custom was challenged and protested by many educated young men in the leadership of Raja Rammohan Roy. Initially, the British Government was not interested in the internal religious affairs of the natives. However, with the initiatives of Raja Rammohan Roy, the British at last passed the Sati Regulation Act on 4th Dec’1829. This act was criticised by eminent businessmen like, Radhakanta Dev, Kali Krishna Tagore, Gopi Mohan Dev and others. Decrying this enactment as a sacrilege of the religious sentiment of the Hindus, an Association called the “Dharma Sabha” was established in 1830.

Sir Radha Kanta Deb called a meeting of Dharma Sabha in Sovabazar Rajbari to discussion on the abolition of Sati. He along with the Brahmin community were against the change of this Hindu custom. Mutty Lal was invited to this meeting. He vehemently protested against the Brahmins and criticized the members for their lack of sympathy. He called the meeting “Adharma Shaba” (nonreligious). In the meeting, he had extensively supported the abolition of Sati and requested the rich to donate abundantly for the relief of the poor, orphan and the widows. Mutty Lal declared a sum of Rupees 30,000 to create a trust for the orphans and widows for providing them with monthly financial help. This immensely spoke of his innate determination and courage to bring about a constructive change in the society.

During those days’ child marriage was a common practise. Many young girls were married off even before attaining puberty to aged men. Specially the Kulin Brahmins, sometimes had 100 wives! Mostly these girls became widow at a very young age. After abolition of Sati, number of child widows in the society kept increasing. These young girls led a tedious life full of sacrifices and duties. This situation touched many social reformers in Bengal. During 19th century, women was not valued and respected in the society. Raja Rammohan Roy was the pioneer in inculcating the idea of women education so that they can value themselves and rise above the prevailing blind faith and superstitions.  He intensely supported the widow remarriage. This movement was later led by Ishwar Chandra Gupta, better known as Vidya Sagar.  Mutty Lal Seal was deeply moved by this philosophy and supported the movement of uplifting women in the society. He declared, a sum of Rupees 20000, for the first man who would agree to marry a widow.  The incident was mentioned in Dijendra Lal Roy’s newspaper, Bharat Barsha Patrika in 1931.

In 1854, Mutty Lal wrote a paper with his suggestions on widow remarriage and in 1855, he requested the intervention of the British Government. In the next year, on 16th July 1856, the widow remarriage Act was passed.

Do keep a watch for Episode 2 to know about Mutty Lal Seal’s immense contribution towards the society.