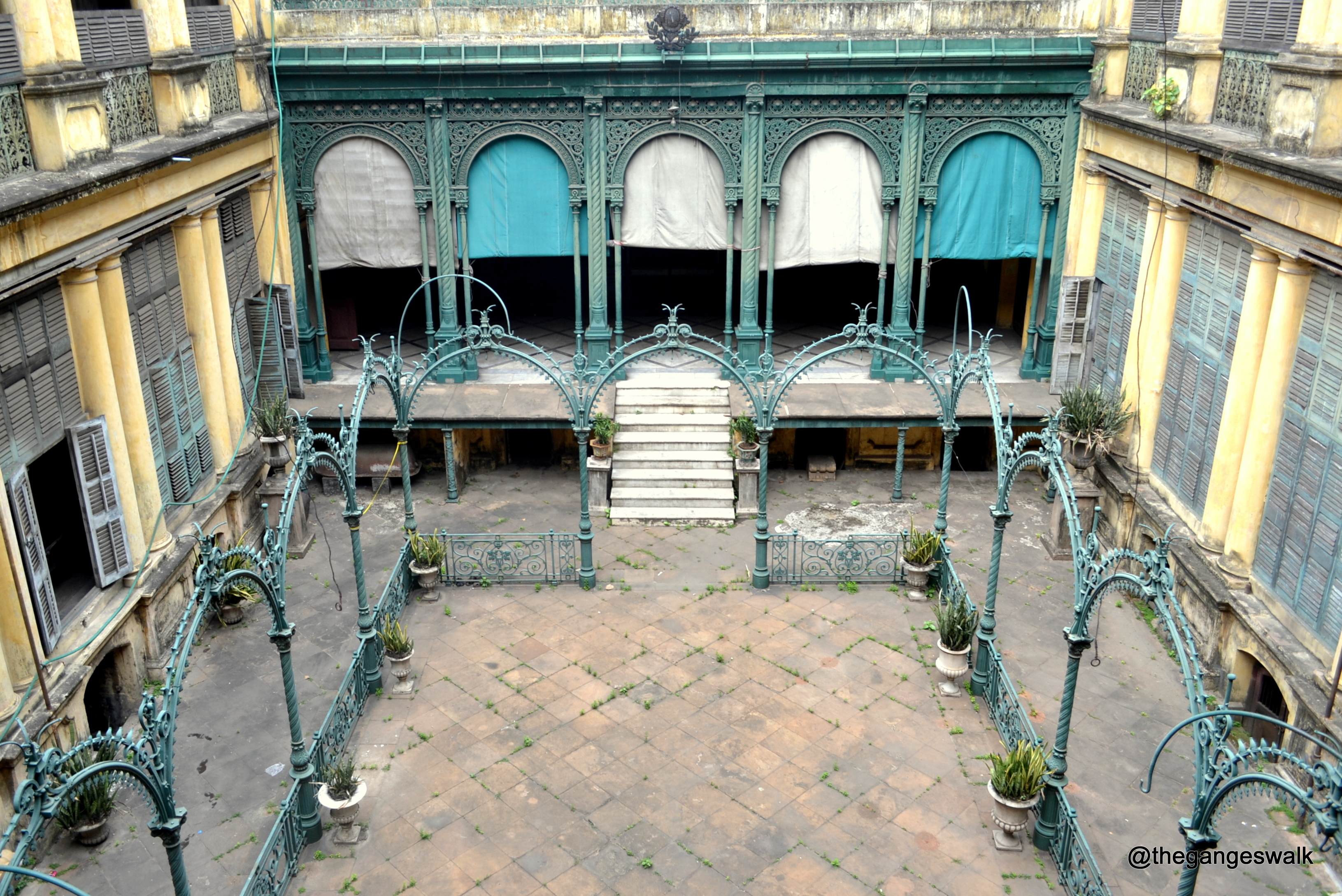 The golden era of Calcutta would be less sung of, if only praised of the educational excellence, cultural intellect, social and political reforms by the Bengalis during the British period, the business acumen of the Bengalis were no less. Once, they were the most prosperous and celebrated business community of India and was appreciated for their acute business senses.  The Ganges Walk Team embarked on a journey to re-discover the forgotten glory of this economic resurgence of the earliest settlers of Calcutta.

Pathuriaghata was once the abode of the rich Bengali Business class. Some of the families belonged to the gold merchant community known as the ‘Subarna Banik’. These rich Bengali elites had beautiful mansions that showcased their grandeur. Their houses are reminiscent of glory and heritage, although mostly dilapidated now, stands tall even today, speaking of their enormous wealth and power. Here stands the beautiful mansion of the Mullick family at 67 Pathuriaghata Street. On a quiet winter morning, our Ganges Walk team visited their residence and had the privilege to interact with the present generation of Mullick’s, Mr. Rajat Mullick and Mr. Bijan Mullick, who currently reside here.

The Mansion – An Architectural Brilliance

On entering the two storeyed mansion surrounded by a beautiful garden decorated with marble statues and fountains, in a busy lane of North Calcutta, we were overwhelmed by the majestic architecture of the house. Rajat Mullick enlightened us with the history and stories associated with their family. The two storey house is believed to be built by Mackintosh Burn and company. The door to the entrance is made of Cast Iron. This beautiful mansion has a huge courtyard surrounded by Corinthian pillars, the parapets of which are nicely ornamented with cast irons. From the ceilings still hang the gas lamp shades which takes us back to the golden era of the family. The rooms and the corridors are situated above a five foot elevated plinth running on all sides of the courtyard under which, chambers were made for air circulation. These chambers were later used for storage of unused building materials. The elevated passage had ornamented cast iron benches and European statues’ adding to its grandeur. The courtyard has well curved railings and beams made of cast iron in the centre. Here many public meetings and cultural programs were held.

At the southern end of the courtyard stands the Singha Bahini Thakur Dalan with a huge Ornamented Silver Throne for the deity. From its ceiling hangs Belgium glass chandeliers adding to the grandeur. Even, the pillars in the Thakur Dalan is made of decorated cast iron.

We noticed a huge Iron chest in one of the rooms which is 6 ft in height dating back to 1860 that was made by Pioneer England.

As per Rajat Mullick, a ship full of ornamented cast iron structures were imported from Sun Foundry, Glasgow for building the house. The structure of the mansion is all made of cast iron unlike the use of wooden structures during those days.

The Mullick family has a history that dates to fourteenth century. During the Pathan rule around 1357, Shamsuddin Ilyas Sah had bestowed the title of Mullicks to some Hindus who had discovered the source of gold mines beside the Subarnarekha River, in Bengal. The Pathuriaghata Mullicks had derived their surname from the title bestowed by the Pathan Ruler.

West of Triveni was a small village called Saptagram, situated on the banks of river Saraswati. During 16th Century the Saraswati River had two major business hubs, one was Saptagram and the other was Chattagram. We find reference of Saptagram in the books written by Caesar Frederick, D Elliot and Admiral Warwik, where they have described Saptagram as a business hub. Settled here were the Mullicks, Basaks, and Setts, who were successful businessmen and traded in gold, precious stones, cotton, rice and sugar.

The Arrival of Mullicks in Calcutta

Amongst the earliest settlers of Calcutta, was Rajaram Mullick of the Mullick family. Rajaram shifted to Calcutta from Triveni, late in the 17th century. He was a renowned businessman and soon became a political adviser to the East India Company. As per Sir Evan Cotton’s book, “Some Glimpse into forgotten India”, Bengal Past and Present volume XXIV, “The Bengali families, which have been so closely associated with British rule in India, The Setts, the Bysacks, the Mullicks whose ancestor Rajaram of Trevene, advised Charnock, to transfer the company’s factory from Hoogly to Sutanati (Calcutta)”.

A Fable or a Fact!

One interesting story narrated by Rajat Mullick is about the history of ‘Singha Bahini’ who is worshiped by their family. It is believed that Rajaram’s grandfather, Baidyanath Dey Mullick established this Goddess of Power in their house. The ‘Singha Bahini’ deity has a history of more than 1500 years.

She was believed to be the home deity of Emperor Harshavardhana’s brother Rajyavardhana. Later during the 1500’s, the deity was established by Raja Man Singha in his palace. When Raja Man Singha’s sister was married to Emperor Akbar, it had hurt the religious sentiment of the Hindu priests. One of his priest ran away with the deity from the Mughal Empire to Chattagram (now in Bangladesh).

He established the deity in a cave of Chandranath Hills to save her from Muslims and Bargi attacks. While visiting Dhaka for business, Baidyanath heard about the deity. That night he had a dream, where the goddess asked him to take her to his house. The priest also had a similar dream of giving away the deity to Baidyanath. After the Mullick family started worshipping the deity, the family prospered in trade and business. Since then, ‘Singha Bahini’ is being worshiped by Mullick Family even today.

Darpo Narayan Mullick, the eldest son of Rajaram Mullick, was born in 1672 in Triveni. He came to Calcutta in 1703 and was believed to be very religious and generous man. His only son Nayan Chand Mullick was born in 1713. He was the first in the family to be born in Calcutta. He was a philanthropic man and had a successful business. He had a ghat beside the Hoogly River in his name that he used for trade.  As per the records, Nayan Chand and his brother Sukhdeb were appointed as restitution commissioners of the 13 restitution money account, after the battle of Plassey in 1757. They were responsible for apportioning the restitution money amongst the natives who suffered losses from the damage caused by Siraj-ud-Daula’s Soldiers.

Nayan Chand had Zamindari rights over huge plots of land in Nadia, Hoogly and 24 Pargana’s. He also owned many houses in Calcutta. Some of these houses were rented out to the British officers. Lord Clive, the commander-in-chief of British army, used to visit these houses to be a part of the fellow gatherings of the British army. He had also built many temples throughout Bengal like the Ballab Jeu temple in Ballabpur and Jagannath Temple in Srirampur to name a few. He had also built guesthouses for the pilgrims. His son, Nimaicharam Mullick was born in 1736 in Calcutta.

Nimaicharan was a learned man and was proficient in Bengali, English and Parsi. He was also well versed with the laws of the land. He inherited more than Rs 40 Lakhs from his father’s business. He had established business relationships with British and other Europeans and expanded his business across India and to various European countries. As a businessman, he had suffered a huge loss by investing rupees 3 crores in salt trade during those days. He also had a business of money lending. He used to lend money to eminent Zamindars and Bengali Businessmen during their time of crisis. He had also lent money to the East India Company when required. Hence, he was called ‘the Banker and Mint Master’. During the 3rd Mysore War in the year 1790, he had lent Rs 48 Lakhs to the East India Company with a clause that they had to return Rs 100 for every Rs 60 spent in the war. As per Calcutta Gazette of 1787, Nimaicharam Mullick had spent 30 Lack at the funeral of his mother. He died in 1803 leaving behind a huge property for his eight sons in his will.

To know more about the legends of the Mullick family who protested against the British policies and displayed there grandeur – from purchasing Rolls Royce in bulk to riding Zebra drawn carriage, keep a watch on episode 2.