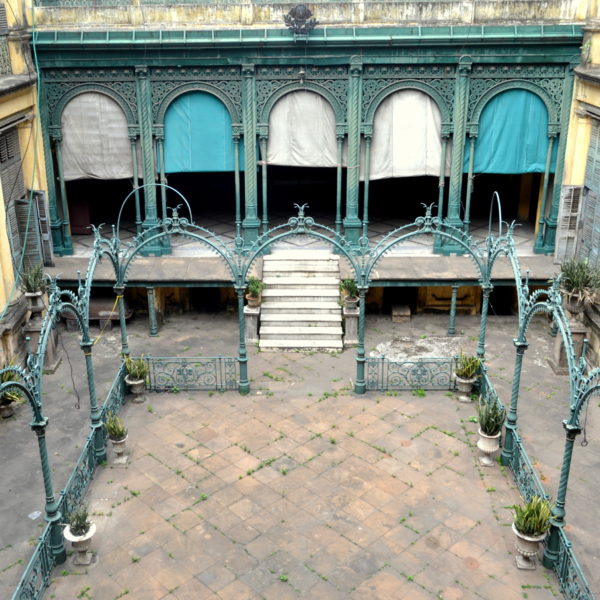 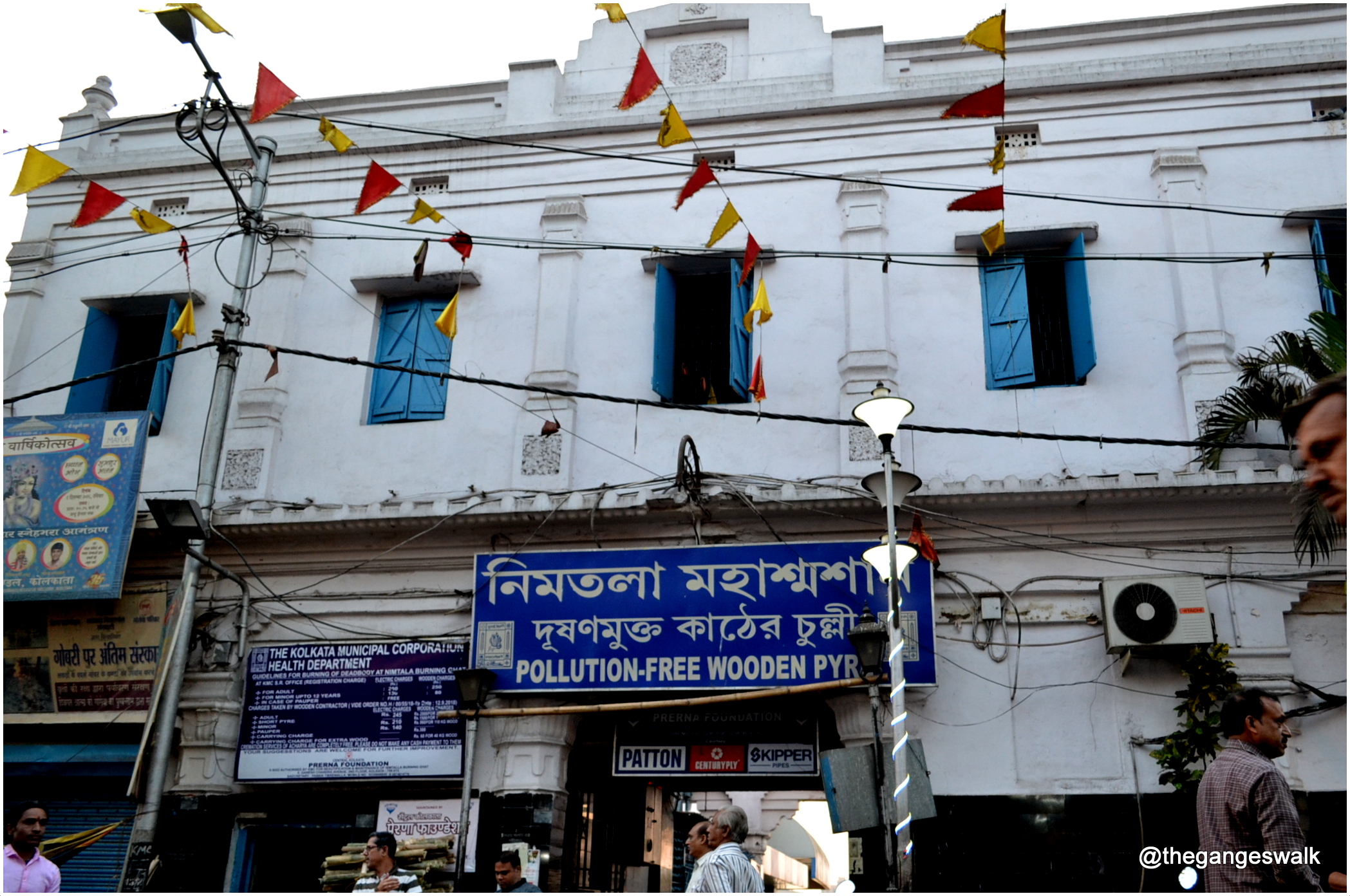 Situated on the eastern bank of river Hooghly is the Nimtala Crematorium. A pollution free electric chimney to control the rising demand of cremating dead bodies of the Hindus within a short time and controlling the pollution that might have occurred from the age old wooden pyre practice . Although there remains a pollution free wooden pyre facility for those who choose to strictly follow the customary rituals.

One would have to cross the present Strand road and the circular railway tracks to reach this burning ghat which now stands on the Strand Bank road. However, this burning ghat has evolved over time. Not much is known of its inception. One can say, its history may date back to more than Five Hundred year, when Nimtala area was a part of a village called Sutanuti.

Amidst the dense forest, near the Hooghly River, stood alone Kali Idol, under a Neem Tree, with only a thatched roof to save the goddess from the vagaries of nature . Here, was the oldest Nimtala Crematorium. Perhaps, the place derived its name from this Neem Tree that bowed down towards Goddess Kali. Since the Kali Idol was placed within the crematorium grounds, she was addressed as Shashan Kali. Later Noni Mohan Banerjee a zamindar, had built a temple for the Goddess, that stands tall even today, called the Anandamoyi Kali Temple.

During those days, the Ganga used to flow where the Strand Road now stands. Around 1800, the Hooghly river started to shift its bank towards the western side. The British formed the Lottery committee in 1817 for constructing Government houses, roads, and residential buildings for their officers. In 6 years, the committee started building the Strand road. The work was completed in 1831. Due to the constructions, the crematorium had to be shifted to where the present circular railway tracks are. In May 1828, the Nimtala Crematorium was constructed within an area of 160 ft in length and 90 ft in width, with 15 ft tall walls in its three sides only open towards the river side.

In those days it was believed that if somebody died at home it is ominous for the family. So, the family members used to abandon the diseased by taking them to the Ganges for their final bath. They used to bring the diseased to the Nimtala ghat. A procession used be an elaborate affair with singers accompanied by instruments singing their way through to bid final adieu to the frail. These processions were called Ganga Yatra and the diseased were called the Ganga Yatri. The main intension of bringing them to the ghats was to leave them behind to die. They were kept in the open air beside the river at night. In the morning, during high tide, the family members used to immerse a part of their body into the river. This was called Antarjali Yatra. It was believed that if the diseased died in this process it would surely pave his way to the gardens of heaven!

Rani Rashmani’s husband, Babu Rajchandra Das faced a similar situation when his aged mother wished for the Antarjali Yatra. Seeing the horrifying situation of the Ganga Yatris, he constructed a shelter to the South of the Nimtala Ghat. This house was called Ganga Yatri Ghar. The Ganga yatris were later kept inside this shelter.

During the Anterjali Yatra, many deceased and old people were also swept away by the tide alive. Similarly many dead bodies were floated down the river as a major part of the society did not have the means to perform the last rights. To help the poor, a fund was once raised for performing the last rights. It was estimated that by spending Rupees Two, a body could be cremated properly. However, this was not completely successful. Due to the prevailing beliefs, bodies of monks, criminals who were anti-national and anti-religious, people who died due to some critical illness or snake bite and people who committed suicide were floated on bamboo frames down the river as their last rights could not be performed.

The Nimtala burning Ghat was not only used as a crematorium for the deceased but was also used to dispose the dead bodies of animals. In 1837, the Calcutta municipality had appointed people who were called ‘Doms’. They brought the dead animals from the city to the Ghat. Here, the skins of the dead animals were peeled off and sold to the tanneries. Rest of the body parts were thrown away in front of the crematorium for the Vultures, foxes and dogs.

On 5th Mar, 1864, Mr. John Stache of Sanitary commission, had pointed out that although the river provided drinking water to the residents, the same river bore more than five thousand dead bodies each year.  Two Hundred dead bodies alone were used to be dumped by Government hospitals into the river.

Sir Cecil Beadon, then Lieutenant Governor of Bengal, tried to shift the Nimtala and Kashi Mitter Crematoriums to Toli’s Nalla, presently at Tollygaunge. In 1864, the Government raised the issue to Justice of the Peace. They called eminent people to discuss this issue. Ram Gopal Ghosh gave justification against this movement of shifting the Burning ghat. Then the commission had to decide against the request of Sir Beadon and made Ram Gopal a Committee member. In 1865 he helped raise funds worth Rupees Thirty Five Thousand with which the area of the crematorium was extended and a wall was erected on the side of the river.

Later in 1875 when the circular railway was being built from Bagbazar to Mir Bahar Ghat, the Calcutta Port Commissioners complained that it was being difficult to lay railway tracks due to the position of the burning ghat. Therefore, the Nimtala Crematorium was further shifted down and was reconstructed by Macintosh Burn & Company at a cost of Rupees Thirty Thousand. This was the third time that the crematorium was constructed.

In 1898, a new shelter for the Ganga Yatris was rebuilt by Girish Chandra Basu, a wood merchant who had business in the Nimtala area. This shelter stands tall even today.

Many eminent personalities like Rabindranath Tagore, Acharya Prafulla Chandra Ray, Acharja Jagdish Chandra Bose, Tarasankar Bandyopadhyay, Manik Bandhapadhya were cremated here. In 2010, the Central Government of India upgraded the crematorium at a cost of Rupees One hundred and Forty million. The Rabindranath Tagore Memorial in the Crematorium compound was beautified as part of the 2010 project.

4 thoughts on “Evolution of the Nimtala Burning Ghat”